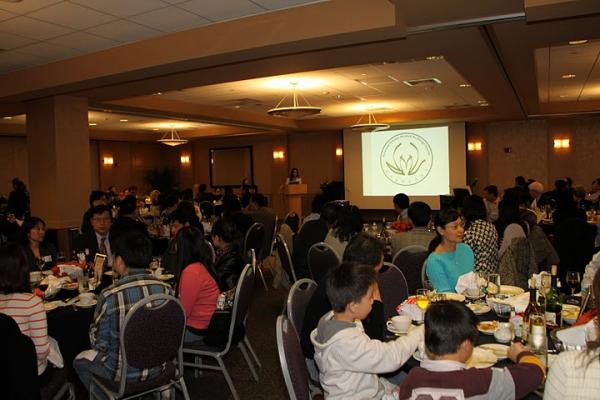 October 30, 2010, the American Chinese Medical Exchange Society (ACMES) held its annual conference at the Best Western Hotel near the Harvard Medical School in Boston featuring “Asian Health Education”. Nearly 300 physicians and health care professionals across the country participated. In the audience, there were visiting physicians and scholars from China as well.

The program started at 3:00pm with special topic forums on diabetes, autism, hepatitis B, and cancer therapy. The forums were presided over by Danru Lee, attending physician of internal medicine at Harvard’s Beth Israel Deaconess Medical Center.

The diabetes panel was hosted by Dr. Zhao Liu, an endocrine specialist from Beverly Hospital in Massachusetts. The incidence of Diabetes has been increasing in the Chinese population in the recent years, and the disease has already become a serious public health problem. Diabetes specialist Yanping Kong from the Dartmouth-Hitchcock Medical Center in New Hampshire talked about cardiovascular complications of diabetes and the newest clinical progress; Harvard’s Brigham and Women’s Hospital’s professor Yiqing Song, an epidemiologist, described the most serious risk factors associated with the Chinese community, as well as the latest progress in preventative research.

Three autism experts shared their perspectives on the disease during the autism session. The incidence rate of autism has rapidly increased in recent years, attracting the attention of society and academia, as well as the concern of Chinese community. First, Katherine Martien, a Neurodevelopmental Pediatrician and Autism expert from Mass General Hospital’s pediatric outpatient Ladders clinic, talked about new EEG evidence of autism and treatment considerations. She was followed by Professor Bailin Wu, the Director of Genetic Department of Children’s Hospital Boston, who introduced his newest genetic study and breakthroughs on autism research. Dr. Jing Liu from Mass General Hospital introduced a new diagnostic option and treatment for autism: Using functional magnetic resonance imaging (fMRI) to detect the distribution of blood flow to the brain, as well as for the rational of the use of acupuncture for autism.

The session on Hepatitis B began with Harvard’s Beth Israel Deaconess Medical Center’s liver disease specialist Daryl Lau introducing Hepatitis B treatments and the newest progress in preventative measures. She also addressed medication associated HBV resistance. Professor Rebecca Miksad is an Oncologist and specializes in liver cancer from Beth Israel Deaconess Medical who conducted a detailed analysis for the incidence of hepatitis B and liver cancer in Asian populations. As Hepatitis B is an invisible killer in the Asian population, this was a focus of this event.

Cancer is the number one killer of the Asian community, particularly liver cancer and stomach cancer. To address the concern, Dr. Rebecca Miksed of Beth Israel Hospital shared the newest progress in liver cancer treatment - targeted treatment with systemic therapy. The Director of MGH Center for Translational Pain Research, pain specialist Dr. Jianren Mao talked about the progress made in opioid therapy for cancer-related pain. The President of the Massachusetts Society of Chinese Medicine, Dr. John Zhang, spoke about his research of acupuncture for treating cancer patients.

The afternoon program ended with a lecture on “Hepatoma from an Oncology Point of View” delivered by Dr. Ruth He. of Georgetown University School of Medicine,. At the end of Dr. He’s speech, she offered some disease management options to reduce the liver cancer risk.

The dinner banquet started with a welcome speech by the Conference Chair Xylina Wu, VP of ACMES. Then the President of ACMES Dr. Xuejun Kong reviewed the ACMES’ accomplishment of the past year. During her speech, Dr. Kong reiterated the mission of ACMES as a non-profit 501C(3) organization for medical professionals and called for continued support from everybody. Dr. Kong also summarized what the association had achieved, includes establishing and supporting two medical magazines “North American Journal of Medicine & Health” (in Chinese) and “North American Journal of Medicine & Science” (in English).

The Chinese journal has steadily developed over the past few years. It is aimed at the Asian community in North America and throughout the world, and so far has published 15 issues, and has seen its influence increase both nationally and internationally. The English journal, a peer-reviewed medical professional publication, with 9 issues successfully published, focuses on the major health issues and disparities in the Asian community as well as the research and development of Chinese and Western medicine linkages, and works as a platform for the promotion of Sino-American and international medical exchange. The next issue will be a special edition featuring hepatitis, with Hepatologist Dr Keqin Hu as acting chief editor. Dr. Kong said that next year, the magazine plans to feature common diseases occurring in the Asian community, including diabetes, hypertension, cancer, autism, etc, with special editions or supplements. Dr.Kong specially thanked all editors, reviewers, publishing staffs, volunteers and many contributed articles, critiques, connections, and many people who worked behind the scenes. She sincerely invites more physicians and healthcare professionals with the shared passion and spirit to join the effort and make a difference to our community and global health.

The nearly 300 participants highly praised the symposium. The message of promoting awareness and prevention of Asian population related disease, calling for the support from the society has been well received.

The symposium ended with a unique addition---an hour of performance by local artists featuring Chinese folk dance, Beijing Opera, Chinese folk sound and Weston opera and jazz dance, and a surprise ruffle award of “Physician of the Year”, which turned to be a Halloween physician customs. The jazz dance at the end of the performance brought the whole room into a roar of excitement with everyone jumping up and down following the rhythm of Jazz music which echoed the theme of the symposium in promoting health and well being.

The symposium organizer attributed the huge success to all sponsors and all the people engaged in the preparation of the event and all the invited speakers and panelists.